Posted by info@restoreninevehnow.org on Aug 5, 2019 in News | 0 comments 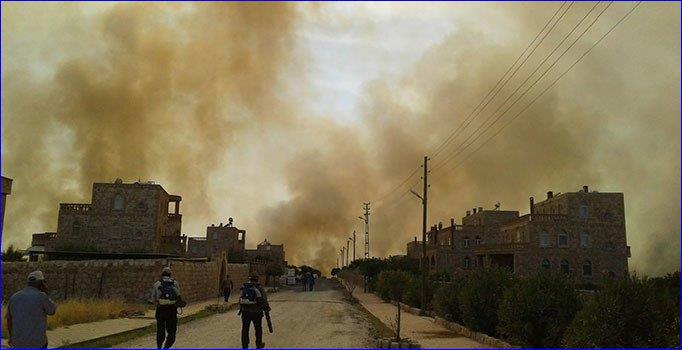 A fire broke out in the early hours of July 26th in the olive gardens of the historic Deyrulzafaran Monastery, a holy place for the Assyrian, 10 kilometers from the city center of Mardin. The monastery was established in the 5th century.

According to various Turkish media outlets, hundreds of olives and almond trees were burnt in the fires in the gardens around the Monastery of Deyrulzafaran. The olives gardens are an important source of income for the monastery. The inhabitants of the monastery and the fire department of Mardin intervened to extinguish the fire.

Speaking to Sputnik News, Afrem Johannes, Guide of Deyrulzafaran Monastery, said the fire broke out around 2:00 AM on Saturday. He said it appears the fire was set by a group of people who spent the evening in the gardens of the monastery. A police investigation was launched into the incident.

Another fire broke out around noon on Saturday, July 27th, in the Bagok mountain region, which is located between Nusaybin and Midyat districts. Pushed by the wind, it reached dangerously close to the Assyrian village Elbeğendi (Kafro). For several hours the village remained under heavy smoke and at high risk; the villagers fought the fire with their own means. Through intense efforts of the Assyrian villagers and a tardy fire brigade the flames were brought under control and prevented from reaching the houses.

Kafro was one of the earliest Assyrian villages which saw the return of Assyrians to Tur Abdin. Several families, former inhabitants of Kafro, who lived in Switzerland and Germany initiated the project. Initially, fourteen families returned to rebuild their houses anew and to resettle there.

According to Voice of America another fire was reported in the town of Şırnak in İdil as fire fighters worked to extinguish the fire around the monastery of Deyrulzafaren. Another fire broke out in the vineyards of the Assyrian village of Öğündük (Midin). 100 hectares of grape and peanut trees were destroyed.

The summer of 2018 was a particularly busy season for the Tur Abdin region, which saw, for the first time since the exodus of the Assyrians from Turkey, almost a thousand Assyrians living in the European diaspora visiting their partly abandoned villages and homes. Because of discrimination and precarious living conditions in southeastern Turkey during the last decades of the 20th century, they were forced to leave their homeland for Europe.

Assyrians suspect that some radical groups in southeastern Turkey are becoming increasingly uncomfortable with the returning Assyrians, a movement that was initiated by an appeal of Turkey’s then Prime Minister Bülent Ecevit in 2001. Returning Assyrians discovered that often their lands had been seized either by the state or by Kurdish tribes. Hundreds of families are affected by expropriations. The orchestrated fires are seen by some Assyrians as a signal to scare them from returning to their villages
SOURCE: AINA.COM